Plunging ranulas – not quite a “frog” in your throat

Over the past few months I have seen a higher than usual number of patients with plunging ranulas. There is no obvious reason for the increase, just one of those phenomena of medical practice where rare conditions come in waves. This article describes what ranulas are, how I treat them, opposing views to how the term originated, and their relationship with frogs.

What is a ranula?

A ranula is a pseudocyst which forms under the tongue in the anterior (front) floor of mouth. It is filled with saliva due to a damaged salivary gland, the sublingual gland. It is called a pseudocyst because it looks like a cyst on scans but lacks the epithelial lining cells which typically form the capsule of a cyst.

What is a plunging ranula?

If the pseudocyst grows down into the neck it is called a plunging ranula. In a plunging or diving ranula, saliva from the damaged sublingual gland penetrates between the fascial planes related to the mylohyoid muscle which it sits on. The saliva either runs backwards around the posterior edge of the muscle or can penetrate through small defects in the muscle called boutonnières and appears in the submandibular space. The surrounding tissues become inflamed and wall of the saliva and mucous creating a pseudocyst. It works like a balloon, or a tissue expander. From the outside the plunging ranula presents as a lump in the upper neck. 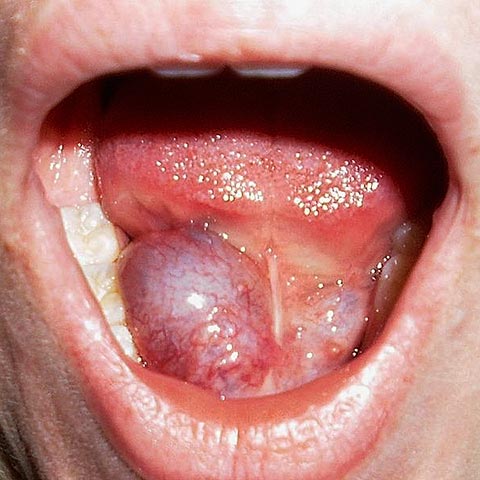 Ranulas are saliva filled psuedocysts in the floor of the mouth 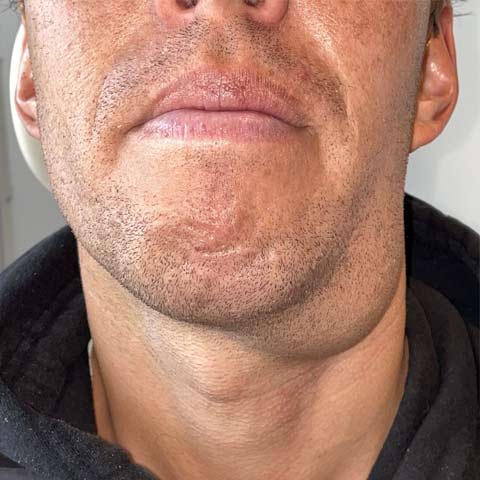 Patients typically notice a lump or swelling under their chin and describe the lump as uncomfortable rather than painful.

The size of the pseudocyst can fluctuate due to the amount of fluid. Some days it can be larger, some days it can be smaller. This makes it tricky for patients to have confidence in their symptoms and question whether or not something unusual is happening.

Diagnosis involves physical examination and a CT or MRI. MRI shows spectacular results, but CT is cheaper and just as effective in arriving at a diagnosis. 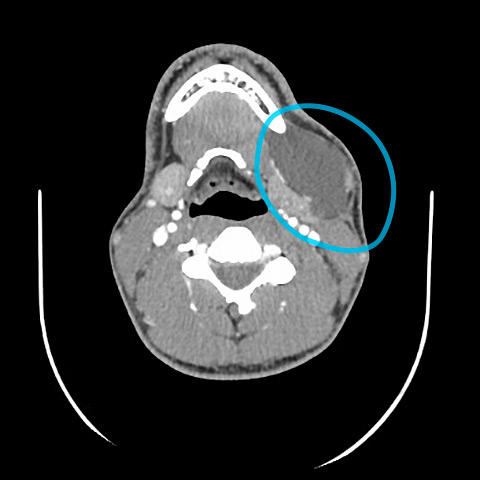 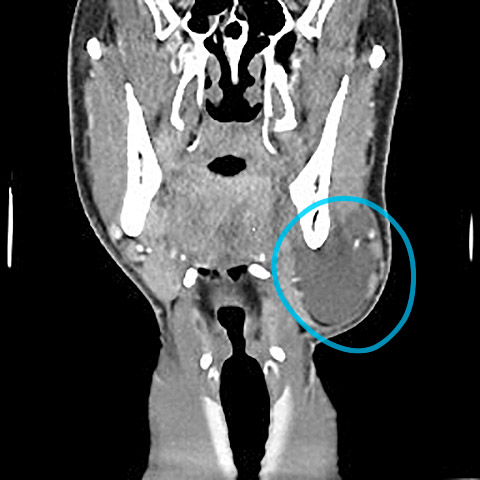 These CT scan images show the same ranula on the left side of the neck from two different angles.

Plunging ranulas are treated surgically. Despite appearing as a neck lump, the only effective operation is to remove the entire sublingual gland through the mouth. This decompresses the pseudocyst and ensures that the source of the problem is removed and cannot happen again. 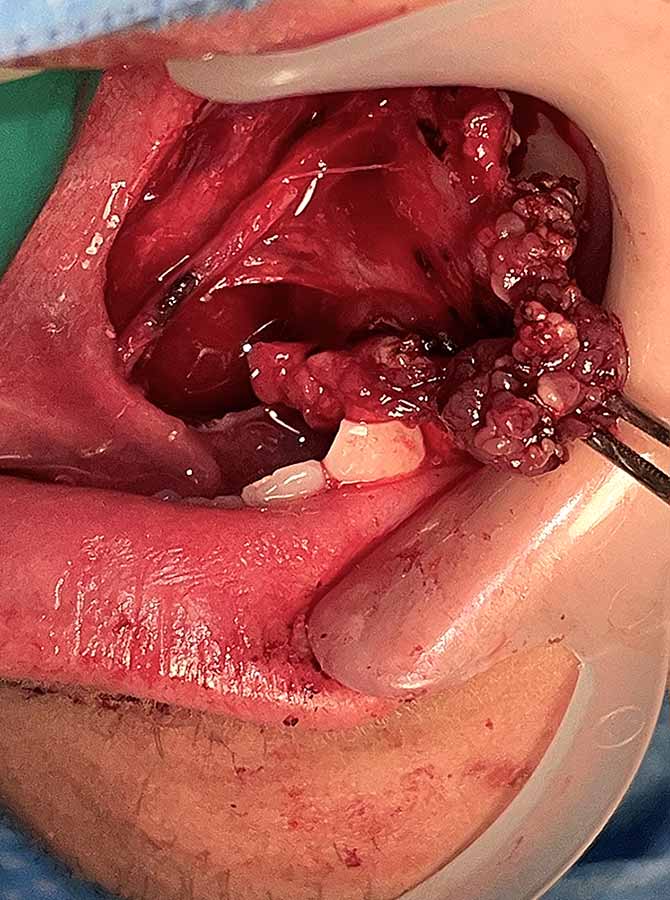 The plunging ranula on its way out via the mouth 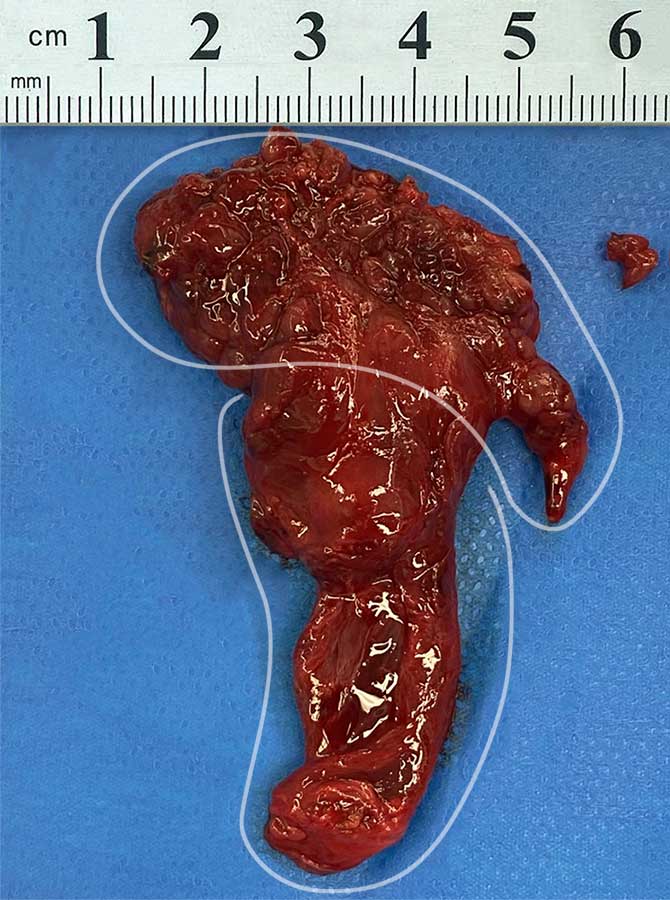 The short answer is that nobody knows. We do know, however, they tend to be more common in men than women, and there is a higher incidence in Polynesian populations.

What does this have to do with frogs?

I promised a discussion about the name and its relationship to frogs. I was taught the term ranula is borrowed from the Latin, meaning a little frog or tadpole. French physician and surgeon Guy de Chauliac is credited with coining the term in the Middle Ages, around 1300. Ranula comes from the Latin word rana which means frog. Medical students are taught ranulas look like frog bellies, hence the name. But it might not be so simple. In 2014, French medico Dr Phillippe Albou revealed some convincing evidence to the contrary in his paper “La présence des volatiles, des animaux aquatiques et des insectes dans le langage medical”, or in English, “The presence of birds, water animals and insects in medical terminology” (Albou 2014).

Albou agrees the term ranula is based on a very old metaphor. “Frog” in Greek was already used in the 6th century by Aetius of Amida, a Byzantine Greek physician and medical writer, to designate “a swelling under the tongue, which is called frog” (Skoda 1988). A century later, Paul of Aegina, another Byzantine Greek physician, added that “the ranula is an inflammatory cyst which occurs under the tongue, especially in small children” (Dechambre 1864-1880). Albou’s research among the published works of ancient medical practitioner-writers offers a number of alternative explanations:

Operation for removal of ranula from a 15th Century Turkish Manuscript

I have to say, Rivière’s theory makes as little sense to me as the translation. The best I can do is suggest he is referring to frenulums and frog’s bums. I’ve included a couple of pictures so you can make up your own mind. 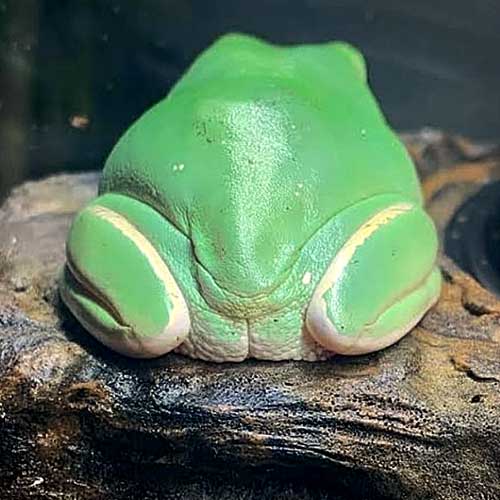 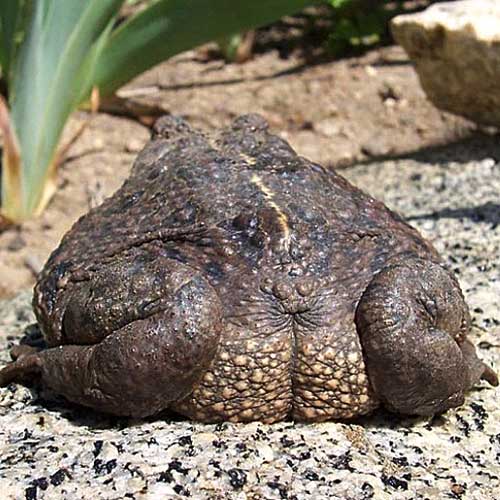 What do I think?

Well, now I’m not so sure. A frog belly, a croaking voice, a bulging neck, a frog’s bum? I am happy to keep my options open. But I did find it interesting to consider the alternatives, especially when I discovered that many frogs around the world have vocal sacs, like the one in the photo at the beginning of this blog. Maybe I need to revisit frog dissection in order to make up my mind.

Dechambre, A. (1864-1880). Dictionnaire encyclopédique des sciences médicales, Asselin. Paré, A. (1630). The workes of that famous chirurgion Ambrose Parey translated out of Latine and compared with the French. by Th: Johnson. London, T. Cotes and R. Young.